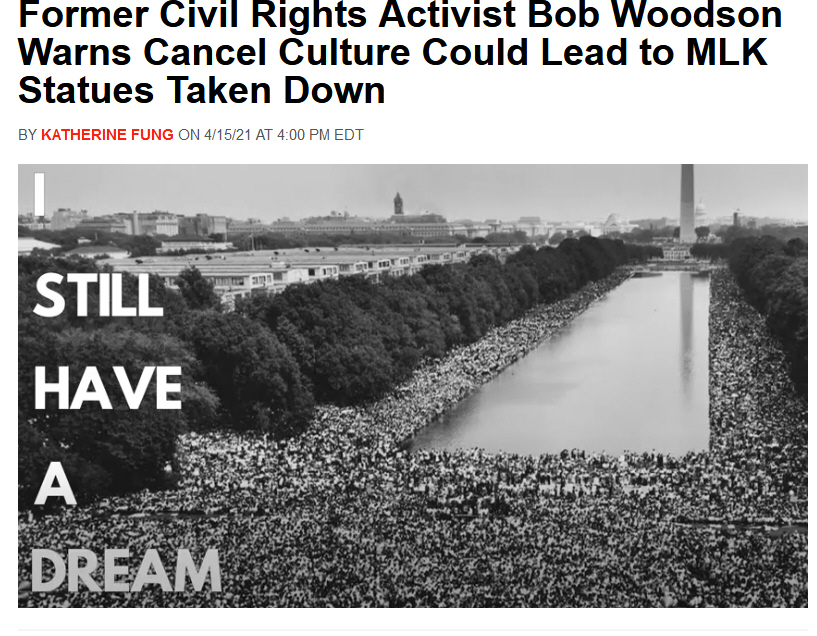 Former civil rights activist Bob Woodson is warning the progressive left that cancel culture could lead to the removal of Martin Luther King Jr. statues across the country.

“The fact that the statue of Frederick Douglass in Rochester, New York, was torn down this summer gives you an idea of where the left is going with the perversion of the civil rights movement,” Woodson told RT America’s Steve Malzberg. “It’s really a perversion of it that is causing this kind of moral drift.”

Speaking of King, Woodson said, “I wouldn’t be surprised if this time next year they take his statue down.”

“Dr. King, to paraphrase him, he said that racism isn’t bad because it’s visited upon Blacks by whites, it’s bad because it is evil,” Woodson said on RT America, a channel that is part of Russia’s RT network. “And therefore all of us—Black, white, brown—we must come together to confront evil.”

Woodson also argued that The Nation‘s justice correspondent, Elie Mystal, “an example of someone who is really out of touch,” undermined King’s philosophy in a recent op-ed. Mystal recently wrote an article describing his indifference toward returning to normal life after the coronavirus pandemic because of the racism he will be confronted with.