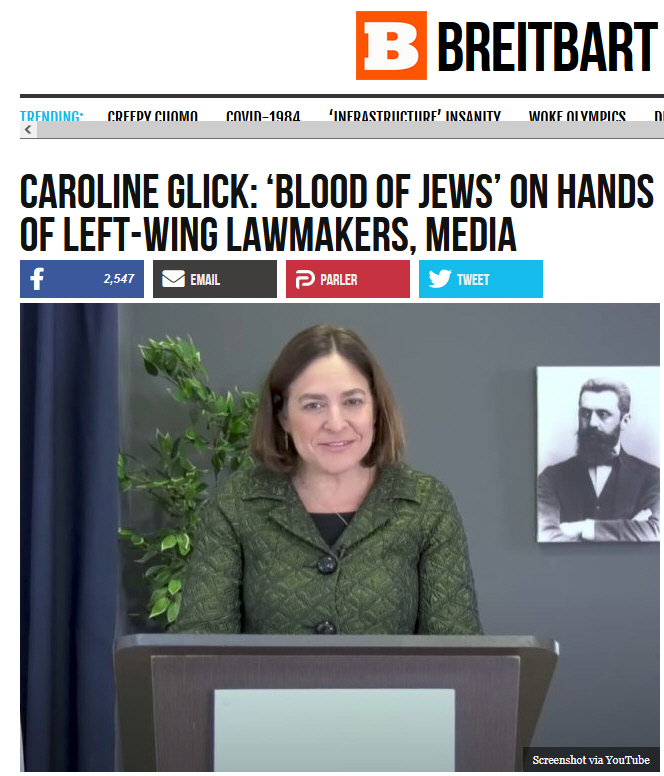 Appearing on Steve Malzberg’s weekly Sunday commentary show Eat the Press, conservative American-Israeli columnist Caroline Glick blasted congressional leftists and the left-inclined media for a recent wave of violent attacks against Jews, accusing the left wing and its lawmakers of hating the Jewish state and having “the blood of Jews” on their hands, while blaming the media for “transforming America into an antisemitic state.”

After Malzberg claimed the media “will always blame Israel and report the Palestinian propaganda,” Glick agreed.

“It’s pretty amazing that Hamas, a terrorist organization, attacked Israel with over 4,300 rockets and missiles and mortars in the space of 11 days,” she said, adding that “Israel did not provoke Hamas at all.”

Glick went on to blame the left and the media for why Israel is widely portrayed as the aggressor despite the actual circumstances:

And yet, Israel is now the subject of a new investigation at the U.N. Human Rights Council and, of course as you showed, it’s being pilloried by all of the bleeding hearts on all of the major networks in the United States because it’s just become the cause célèbre of the left to hate the Jewish State and to blame it for the aggression that’s being perpetrated against it.

“It’s just all about blaming the Jews,” she added, “it’s also what’s happening on the streets of New York and California.”

Malzberg then highlighted how UNRWA Gaza chief Matthias Schmale was pressured by Hamas to retract a statement in which Schmale told Israeli TV that IDF strikes on the Gaza Strip appeared to be “precise” and “sophisticated.”

In response, Glick noted how intimidating those who speak against the pro-Palestinian narrative is a common occurrence:

We’ve seen it all along: that a reporter or an official gets out from under the official narrative that ‘Israel’s evil’ and that it has to be blamed again for the aggression being perpetrated against it by Palestinian terrorists and other terrorist organizations in Lebanon, and of course all directed from Iran, and they say something true and they get into trouble.

Glick also noted how when two Israeli soldiers were lynched by a Palestinian mob in 2000, the Italian journalist who captured the brutality on film issued an apology:

Back in 2000 the Palestinians lynched, literally tore apart, two Israeli reservists that accidentally entered into the Palestinian town of Ramallah and they were butchered not only by the [Palestinian] police who they sought protection from but also by a mob of people that came into the police station to participate in their murder.