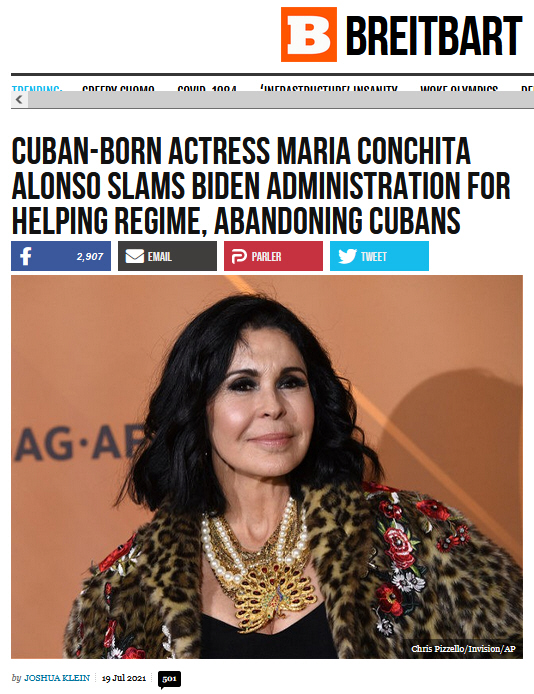 The Biden administration warned Cubans against coming to America after taking to the streets in unprecedented fashion to protest the Cuban communist dictatorship and its policies that have impoverished citizens and robbed them of basic freedoms. Cuban-born actress Maria Conchita Alonso fired back, highlighting the hypocrisy of those who seek to quell the protests, suggesting those who hate the U.S. move to Cuba instead.

On Tuesday, Secretary of Homeland Security Alejandro Mayorkas delivered a warning directly to Cubans who may be considering escaping the current chaos in Cuba.

Appearing on Steve Malzberg’s weekly Sunday commentary show Eat the Press, the Grammy-nominated singer-actress activist responded by claiming it is no surprise.

I’m not surprised about it because [the Biden administration is] friends with the regime in Cuba,” she said.

“I’ve seen videos of them [former Obama-Biden administration officials] partying in Cuba, going to baseball games — they’re friends,” she added. “They’re not going to help the Cuban people who are out there, not demanding (like some in the press and others have said) the vaccines for the COVID, but demanding, finally, their freedom.”