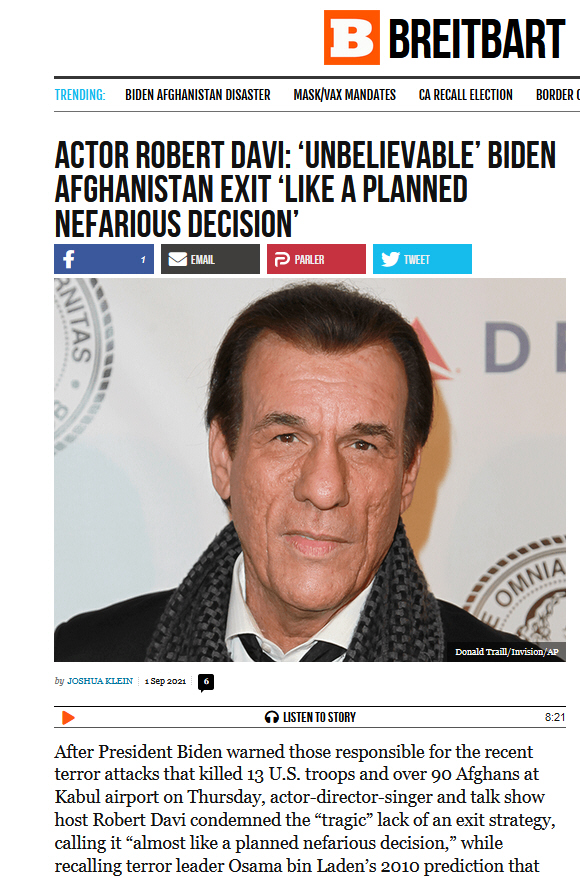 “First off, 20 years of blood and treasure [in Afghanistan] and we don’t have a strategy, we don’t know who people are,” he said.

“They let 10,000 plus prisoners out that we had captured from around the world over the last decades,” he added. “ISIS X, ISIS K, ABC, whatever it is, all kinds of terrorists, bad people that we put in prison that they let out.”

Deeming the lack of strategy “tragic,” Davi claims to have foreseen recent events.

“This is tragic [though] it’s nothing that I did not suspect from the beginning when we knew that everyone on the left was trying to demonize [former President] Donald Trump and get him out,” he said.

“It seems so unbelievable that it seems like it’s almost like a planned nefarious decision,” he added, “And when [Biden] tries the ‘Clint Eastwood moment,’ God bless the guy.”

“In 2010 Osama bin Laden said when they captured his laptop… that he wanted to kill President Obama [and then-CIA director David] Petraeus but leave [then-Vice President] Joe Biden alone because [Biden] will destroy American foreign policy [so] leave him alone,” he said.