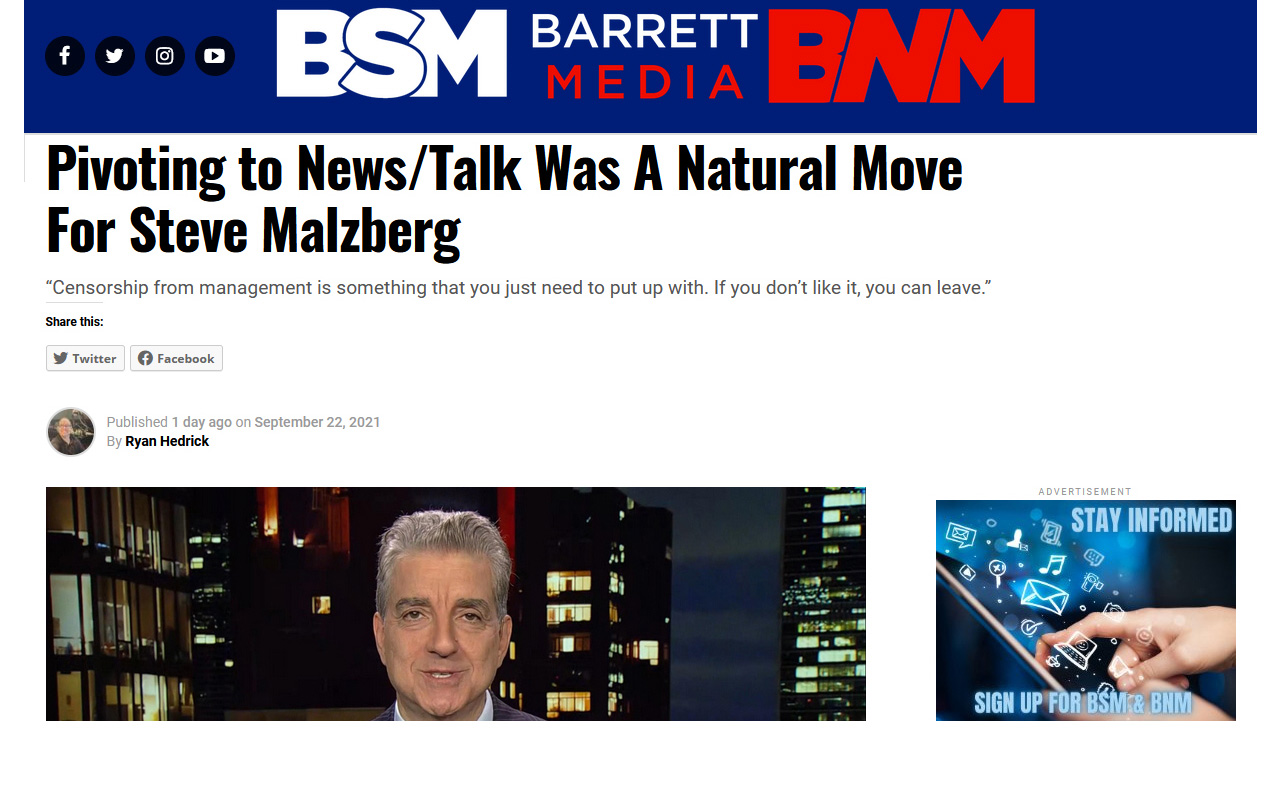 RT America host Steve Malzberg’s accomplished career began in sports but deep down he always had a passion for politics. Even before right-wing commentators were accusing the woke sports media of pandering to a specific base, Malzberg saw the hypocrisy in some of the day-to-day coverage.

The liberal bent fueled Malzberg’s creativity and desire to be different. Topics like race in sports often gave him fodder for his nightly shows in New York City. Years of railing against liberal opponents eventually made switching to news/talk full-time, seamless.

Malzberg’s unique skill set has translated well in both radio and television. Following a lengthy run at iconic WABC Radio, he was hired at WOR Radio and was eventually replaced by New York’s former governor David Patterson.

In 2013, he was hired by Newsmax TV to host the Steve Malzberg Show. Last year, he inked a deal with RT America to host a media commentary show. Now, very content and with plenty of creative freedom, Malzberg offers his expertise on media bias to millions of people. Malzberg recently sat down with Barrett News Media to discuss his path to success, his job at RT America, and how the death of Rush Limbaugh rocked conservative media to its core.

Ryan Hedrick: How did your career start?

RH: Was the news/talk format one you envisioned moving into?

SM: I always had politics in me. My career took a different turn the night OJ Simpson was driving around in a Bronco. That event led to me switching. I was supposed to cover the Knicks who were playing the Houston Rockets at Madison Square Garden in the NBA Finals.

My program director asked me to stay around, come on after the game and cover the OJ story. He invited me to come on the very next day and provide live coverage of the OJ saga and after that I started filling in for other hosts doing political talk and more in the realm of current news events.

RH: One of the biggest challenges for transitioning from sports talk to news/talk is finding your voice. Did that come naturally to you?

SM: Yes. I used to love covering Jesse Jackson when I was doing sports. He would protest that athletics needed more Black coaches. I remember Filip Bondy and Harvey Araton wrote a book on the NBA. One of the themes was how hard and how terrible it must be to be a Black NBA player and deal with white public relations people, that irked me.

RH: You were the first-ever host of Newsmax TV. Are you still a viewer of the network? If so, what are your thoughts on how it’s developed?

SM: I am not going to say anything bad about my former place of employment. Chris Ruddy who runs Newsmax TV was always very hands-on. I am sure he’s just as hands-on now. I know after I left, they brought in a lot of people with hard news experience. I think they have a great mix of talent there, but I can’t say that I watch so I don’t have much to say about the programming.

RH: You’re currently hosting for RT America. What role do you believe you and your network are playing in educating conservative news media moderates push back against cancel culture?

SM: On RT America I host Eat the Press which is kind of a play on Meet the Press, but it’s not aimed at the show by any stretch of the imagination. What we do is really devour the press and their bias. I have the freedom to present examples of media bias every week and I think I do my part of trying to hold the media accountable.

I also have wonderful A-list guests who continue to come on with me. Great conservative Hollywood people join the show such as Robert Davi, Kevin Sorbo, and Maria Conchita Alonso. They buck the trend in Hollywood.

Conservative media is doing a great job getting the word out there. Shows like Fox & Friends are blowing away CNN and MSNBC in the ratings. However, the media is still dominated by the left, and with the advent of social media and the ability and willingness of Big Tech to cooperate with the government and in some instances ban conservatives, we have an uphill fight!

RH: What role do you feel social media plays in helping conservatives get their truth out?

SM: Social media is where it’s at. If we are limited then we are losing. We can’t put doubts about the vaccine or questions about a third shot or any topic without the liberals at Facebook and Google monitoring us and taking us down.

RH: As a host with strong opinions, are you ever concerned about being censored or canceled?

SM: Censorship has existed in one form or another in broadcasting throughout my career. I could go back to any of the stations or networks I have ever worked at and tell you that I’ve been told what not to say, not so much what to say.

Censorship from management is something that you just need to put up with. If you don’t like it, you can leave. I always found that my censorship was carried out in my passion or support of Israel. At RT America, we have a meeting. I come up with the guests and ideas and book the guests and there’s only been one disagreement with a guest. I have never been told what to say or how to say something.

RH: What type of impact do you feel the death of Rush Limbaugh has had on conservative media as a whole?

SM: I was fortunate enough to know Rush and be there when he arrived at WABC in 1988. I knew Rush for many, many years. Limbaugh is irreplaceable. His death set conservative media back. No offense to the people that have taken over for Rush, but I don’t listen. It’s not the same and it’s not appointment radio. I just don’t see how you fill the loss.

Ryan Hedrick serves as the Co-Host of the Morning News Express at WFMD. He started in radio at 17 years old, doing sports and news for his high school radio station. He then spent several years at WFMD in Frederick, MD before joining WBEN in Buffalo, NY. In 2016, while working at WIBW-AM in Topeka KS, Hedrick earned the Kansas Association of Broadcasters (KAB) award for Major Market enterprise reporting. Hedrick grew up in Southern California where he attended Cal State University of Northridge. He can be found on Twitter @SureToCover.