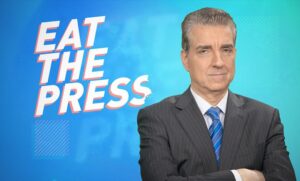 From 2019 until March of 2022, Steve was host of Eat The Press, which took an in depth look at the horrific media bias which is plaguing our nation. Prior to that, Steve hosted the Steve Malzberg Show on Newsmax TV for over four years. It was the first show on the new network back in 2013. Steve’s first guest on the new show was Donald Trump. But it was at WABC radio in New York City where Steve began his career in sports in the early 1980’s, covering multiple Super Bowls, Stanley Cup playoff series, and the World Series. He hosted the N.Y. Jets pre-post and half time shows for 4 seasons, the New York Yankees pre and post game shows in 1990 and the same for the New Jersey Devils, while also hosting Sports Talk.

Always a political junkie at heart, Steve began to host political shows on WABC where he remained until 2004. He won multiple A.I.R.Awards (Achievement In Radio) for his interviewing and hosting skills. He was also named “Man of the Year” by the New York City PBA in 2004

He won recognition and was honored by many local community groups including those in the Cuban-American and Chinese American communities, and was voted Man of The Year by the N.Y.C PBA in 2004.

In 2007 Steve made the trip across town to rival WOR Radio where he remained until heading to Newsmax TV.